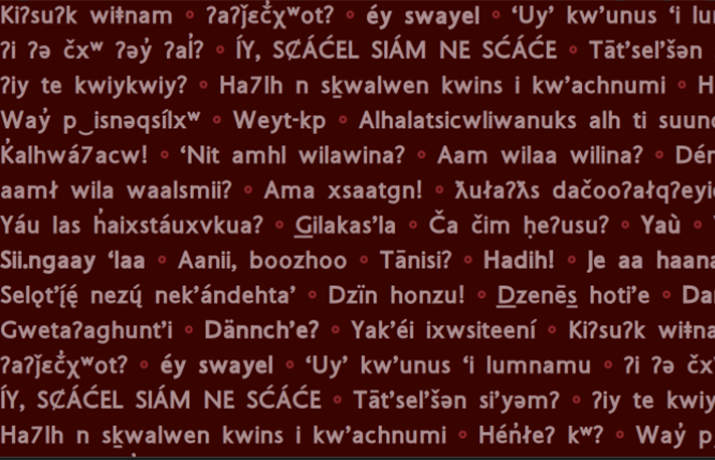 The following text is the proposed joint statement of the international geographical societies on Indigenous Languages in advance of the launch of the forthcoming UN Decade of Indigenous Languages (2022-2032). To sign the declaration, please contact Aran O’Carroll at the Royal Canadian Geographical Society – ocarroll@rcgs.org – by no later than Thursday, 11th February 2022. Plans are being developed for possible joint global communications for Monday, February 21st – International Mother Languages Day.  Details will follow.

The essence and reach of Geography is much more than the study of the earth’s physical features, atmosphere and the impact of human activity upon them. Human and physical geography are inherently intertwined.  Distinct languages and cultures make the human landscape diverse. In turn these distinct languages are, and always have been, shaped by the physical landscape where speakers live.

Geographers then have the opportunity to read, understand and interpret the unique and varied relationships between the land and its inhabitants by seeking to understand the teachings within the language and learning from the First Peoples of respective territories and geographic regions through the languages that shaped them. Indigenous languages are living languages—sourced from the lands, expressing Indigenous creation stories, thriving in the ancient ceremonies and the daily lives of Indigenous Peoples.

January 2022 marks the beginning of the United Nations Decade of Indigenous Languages. Building on the year of Indigenous Languages (2019) UNESCO invites the world to contribute to building a global community for the preservation, revitalization and support of indigenous languages worldwide. Geographical societies are uniquely positioned to support Indigenous peoples as they lead the reclamation, revitalization, maintenance and strengthening of their languages while promoting public awareness of the richness and diversity of Indigenous languages through our educational, editorial, and journalistic channels.

Geographers- whether as students, researchers, educators, writers, explorers, practitioners in business or policy, or as engaged and curious travelers- call upon our leaders to make significant, authentic commitments to place the revitalization and recognition of Indigenous languages at the forefront of all that we do and to take sustained and measurable action on those commitments.

Accordingly, we pledge that our institutions will amplify and intensify our efforts and actions to reexamine and contextualize the unique attributes that are the hallmark of the learning, teaching, and practice of geography through the lens of Indigenous Languages that have drawn together citizens of the world for the Decade of Indigenous Languages. We commit to doing all that we can to apply geography’s potent capabilities to the task of making the coming Decade one of hope and of meaningful action.